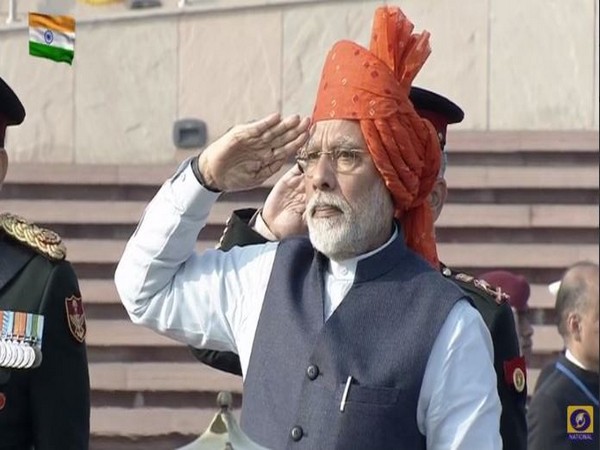 New Delhi [India], Jan 26 (ANI): Narendra Modi's turban play has been a talking point every year and today, as the nation celebrates its 71st Republic day, the Prime Minister opted for a bright saffron coloured printed headgear.
Modi was spotted wearing his statement kurta-churidar combo and the traditional sleeveless jacket with a V-neck, as he paid homage to the fallen soldiers by laying a wreath at the newly-built National War Memorial (NWM) at India Gate.

Modi's turban has always been a topic of discussion during the Republic and Independence day ceremonies.

Thus, continuing the tradition of sporting varied turbans for his Republic Day appearances, this year he opted for what looked like a 'bandhani' print headgear with a waist-long trail. The saffron turban had prints in a brighter shade of the same colour, interspersed with the same pattern in yellow.

Last year, Modi had picked a bright yellow and red turban for his R-Day appearance, paired with his signature kurta combo and sleeveless jacket, which has, over the years, earned the moniker of 'Modi jacket'.
Republic Day is being celebrated across the country with great fervour.
Prime Minister Narendra Modi on Sunday extended his greetings to the people on the occasion of the 71st Republic Day.
"Wishing everyone a happy #RepublicDay," PM Modi tweeted in English as well as Hindi.
Celebrations will be held all across the country to mark the day. On this day, 70-year back, India officially adopted its Constitution. (ANI)

These are the stylish outfits to everyone, In these dresses your personality looking attractive....

Unicorn Star Earring- This type of earing mostly we will see in new trends and nowday also. We can wear it only with western ...

Beautiful Designer Sleeves: Every girl wants to look stylish & fashionable. Having a design in sleeves is in trend as well as ...

Different Types of Cotton Fabric and their Qualities

Different Types of Cotton Fabric and their Qualities There are different types of cotton such as Flannel, Denim, Muslin, Chenil...

Enjoying sunday with my sis at C.P.